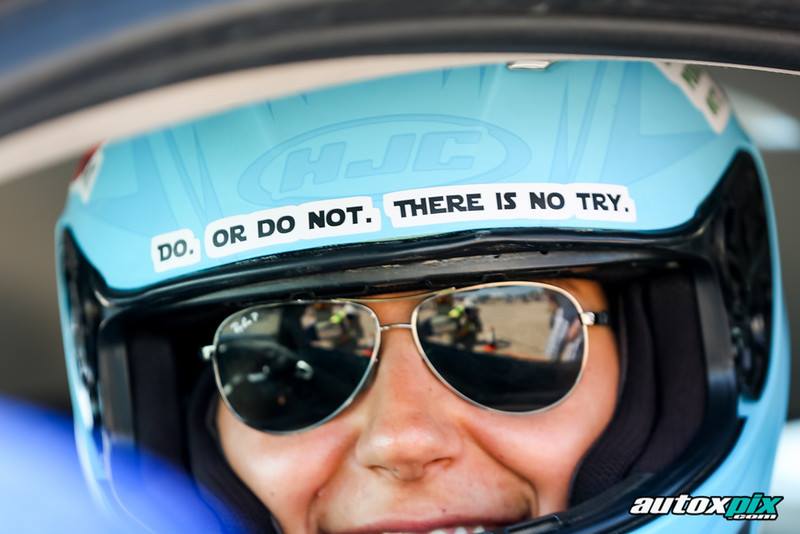 Teddie Alexandrova shares her insights on her autocross and racing life including working SCCA's Track Night in America and SCCA's Starting Line school.

Teddie started racing in 2007 in "her baby" E46 BMW M3.
She actually did a few track events before trying autocross.

She made friend's with fast people.  Reminds me of the saying you are the average of the 5 people you hang out with the most.

She was tempted to give up on autocross because she wasn't fast.  She made it to an Evo School for Autocross Coaching before giving up and turned the corner after the school and started improving.

I really like how she said driving with a purpose and intent is how she improved.  Every event/run are you focused on improving something?

We discuss her knowledge of NC Miata's as well as RX8's (bigger miata).

She discusses thoughts of braking early and how stock cars handle with their softer suspension.

It was interesting hearing how she had not seen national style sweepers because her local lot was skinny so there were only offsets.  (I just saw a video linked on Reddit under autocross where an event in Florida was held on a regular road with ditches and power poles ahh, they also wouldn't know what a sweeper looks like.)

She brings up being seamless when transferring weight in the car so as not to notice the nose of the car diving.

She has listened to enough podcasts to know I was going to bring up the left foot or right foot braking question.

She talks about the STU cars they have and how they moved all their suspension form the older car to the newer car right before nationals.  Why the move, MORE POWER and a higher speed 2nd gear.

She mentions how to setup a 99 miata sport with the sway bar and racing beat sway bar.

Ever thought of running on crappy tires?  Well it can teach you to anticipate. (Don't setup your car for the wrong tires though!)

She and Brian use a headrest mount for their video camera because seeing hand inputs is sooo important.

She covers the SCCA Starting Line Schools (Autocross Coaching).  Sounds like a lot of seat time and comes with a free local entry and a Track Night in America entry as well.  Sign me up!

I liked her saying "be hungry for what's next on the autocross course".

And "unwind the wheel until it affects you line".

She has a list/plan of what to work on this autocross event.

It was fun and insightful!